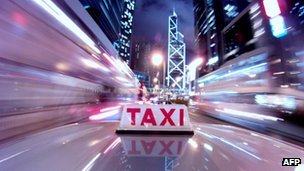 The lawsuit, which was withdrawn on Thursday after the prosecution offered no evidence, lasted six months.

Tam Hoichi said the case had tired him out, and he wanted an explanation as to why he was sued.

Hong Kong taxi drivers frequently round up to the nearest dollar when giving change.

It is considered a common practice by many drivers and passengers in Hong Kong.

The overcharging incident is reported to have occurred during a taxi ride in October.

The passenger did not demand the missing change at the time, but later reported the incident to the police, the SCMP said.

Mr Tam attended the trial hearing on Thursday morning on charges of “taxi overcharge”, but was cleared after the case was dismissed.

“The case was reviewed by the Prosecutions Division,” Hong Kong’s Department of Justice said. “Given the trivial nature… it was considered not appropriate to proceed with it.”

Mr Tam told reporters at the court that he felt the lawsuit was “really not just”.

“I want to know why the opposite side, for the reason of this small amount, would want to sue me,” he said.

A representative for Hong Kong taxi and minibus drivers told AFP news agency that the court case had wasted taxpayers’ money and time.