Norwegian PM Jens Stoltenberg spent an afternoon working incognito as a taxi driver in Oslo, he has revealed.

Mr Stoltenberg said he had wanted to hear from real Norwegian voters and that taxis were one of the few places where people shared their true views.

He wore sunglasses and an Oslo taxi driver’s uniform for the shift in June, only revealing his identity once he was recognised by his passengers.

His exchanges with his passengers were captured on a hidden camera.

I’m pretty well known in Oslo, but I tend to sit in the back seat”

The footage – made in collaboration with an advertising company – has been posted on the prime minister’s Facebook page and made into a film which will be used as part of his campaign for re-election in September.

“It is important for me to hear what people really think,” he told Norwegian media.

“And if there is one place people really say what they think about most things, it’s in the taxi.”

Some of the passengers who appear in the film had been told to wait for the taxi – without being told who would be driving – while others were picked up randomly and from taxi ranks.

Most of them appear to realise very quickly that there is something different about their driver, with one saying: “From this angle you really look like Stoltenberg.”

Another says she was lucky to meet him as she “wanted to send a letter”.

The conversation turns to politics in most cases.

Mr Stoltenberg engages one passenger on education, saying: “The main point is to make sure good students have something to stretch for, and to give those who struggle extra help.”

None of the passengers was charged for the ride.

Mr Stoltenberg told the VG newspaper: “I’m pretty well known in Oslo, but I tend to sit in the back seat.” 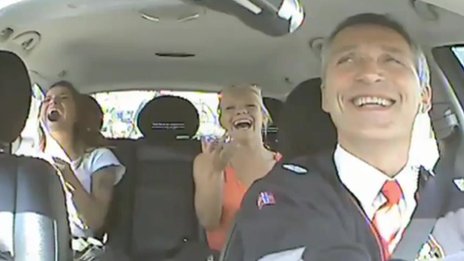 The Labour prime minister came in for criticism for his driving, at one point jolting the car abruptly when, he said, he mistakenly applied the brake pedal on the automatic car, thinking it was the clutch.

He said he had not driven in eight years.

Mr Stoltenberg is popular in Norway, but opinion polls suggest he is lagging behind the opposition ahead of the election.

But asked by VG whether he would consider becoming a taxi driver full time if he lost the election, Mr Stoltenberg replied: “I think the country and the Norwegian taxi passengers are best served if I’m the prime minister and not a taxi driver.”